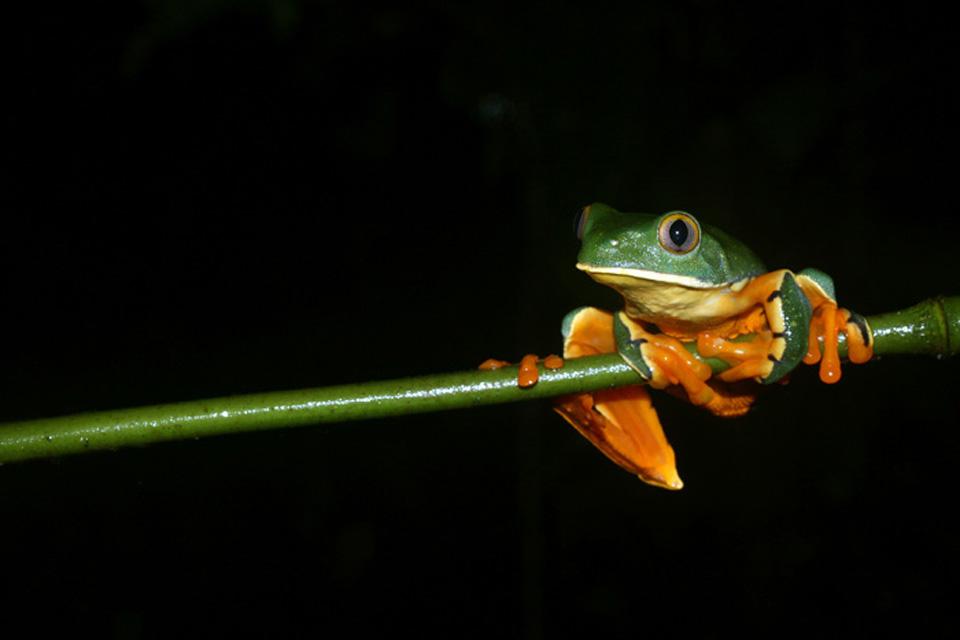 Cruziohyla calcarifer
Thriving populations of this elusive and beautiful tree frog remain at the CRARC reserve thanks to the ongoing efforts of Brian and associates. Breeding sites are artificially augmented allowing populations to increase. 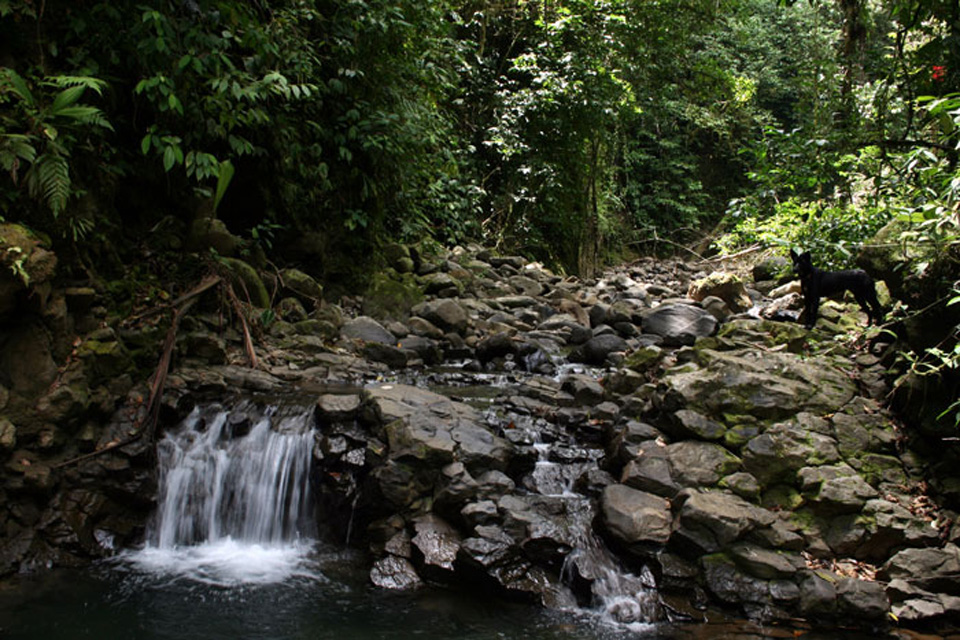 Streams like this drain the forests of the CRARC reserve and feed the Rio Siquirres below. Forested slopes in the charging zones of rivers are essential in maintaining water quality and preventing erosion. 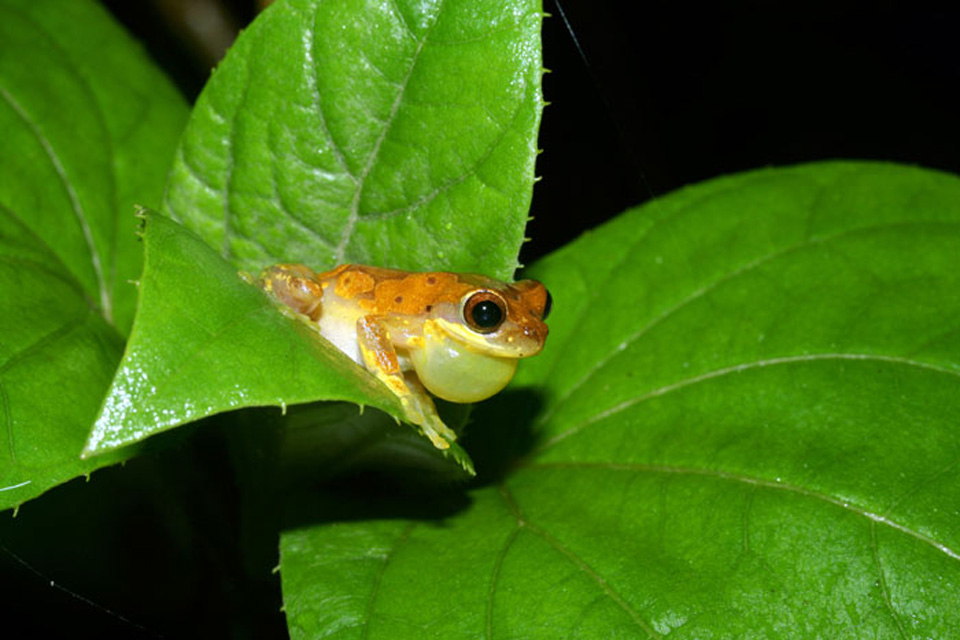 Hyla ebracatta
The hourglass tree frog is but one participant in the nocturnal chorus at the CRARC reserve. 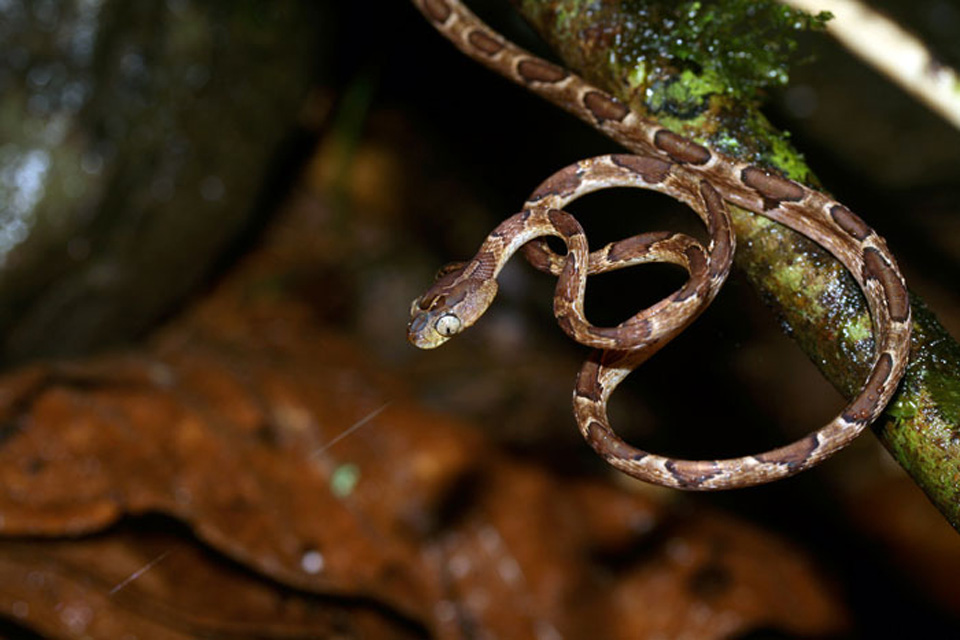 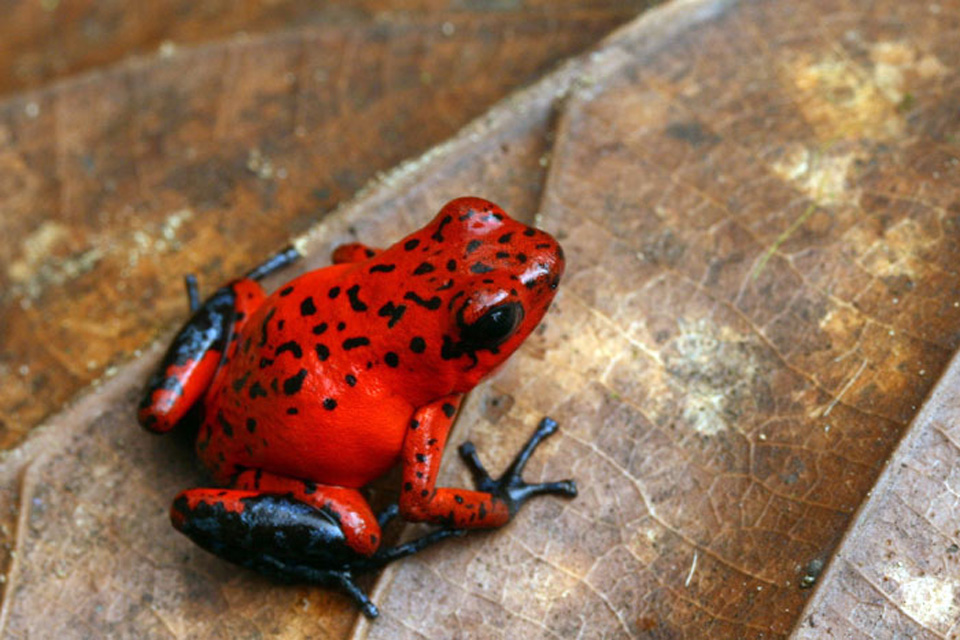 Oophaga pumilio
Undoubtedly the most filmed, studied and photographed of all poison frogs, the rana roja thrives throughout Costa Rica’s Atlantic versant. 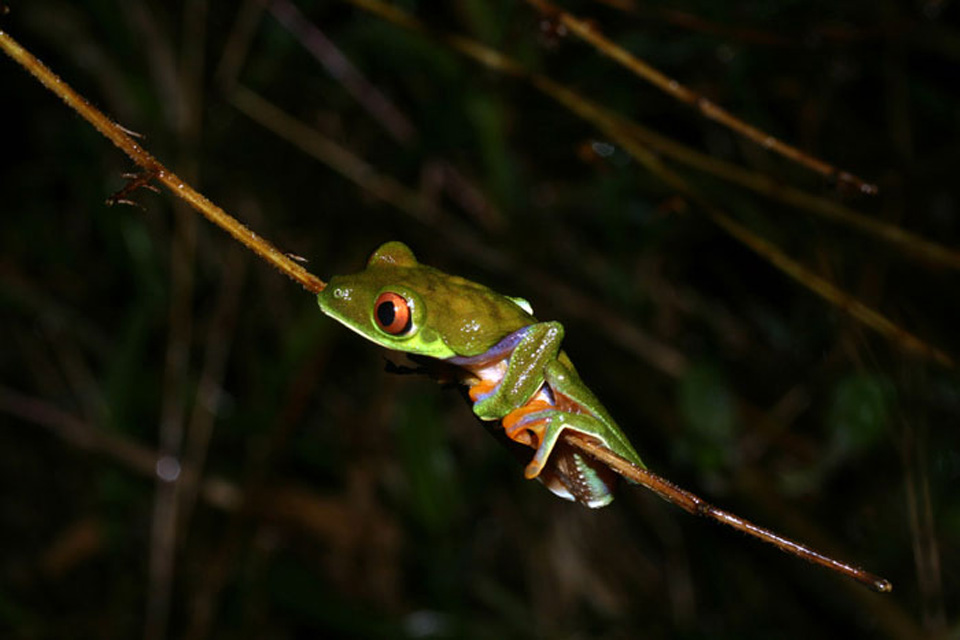 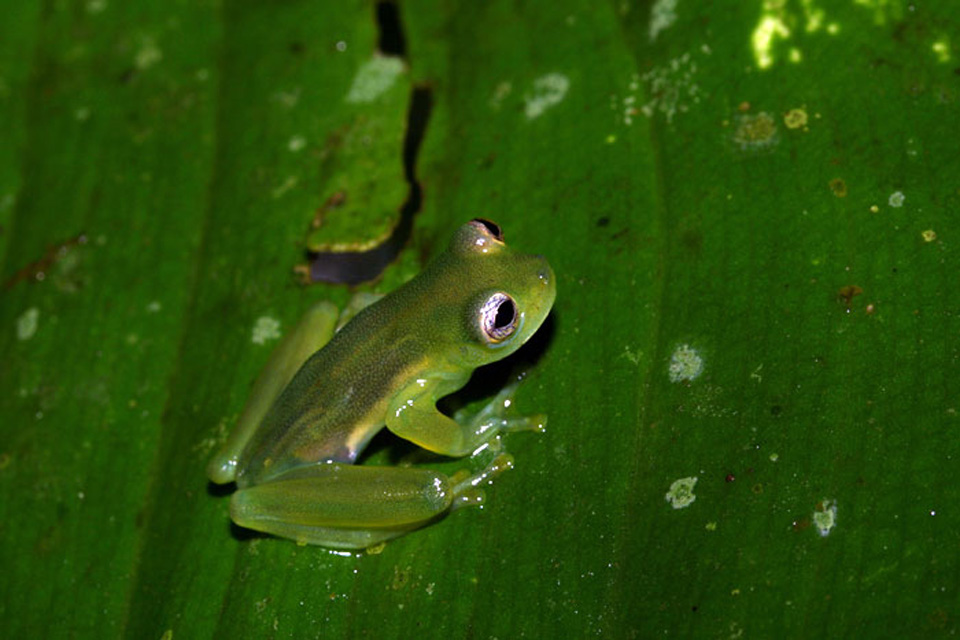 Cochranella spinosa
One of several Centrolenid species found throughout riparian regions on the CRARC reserve. 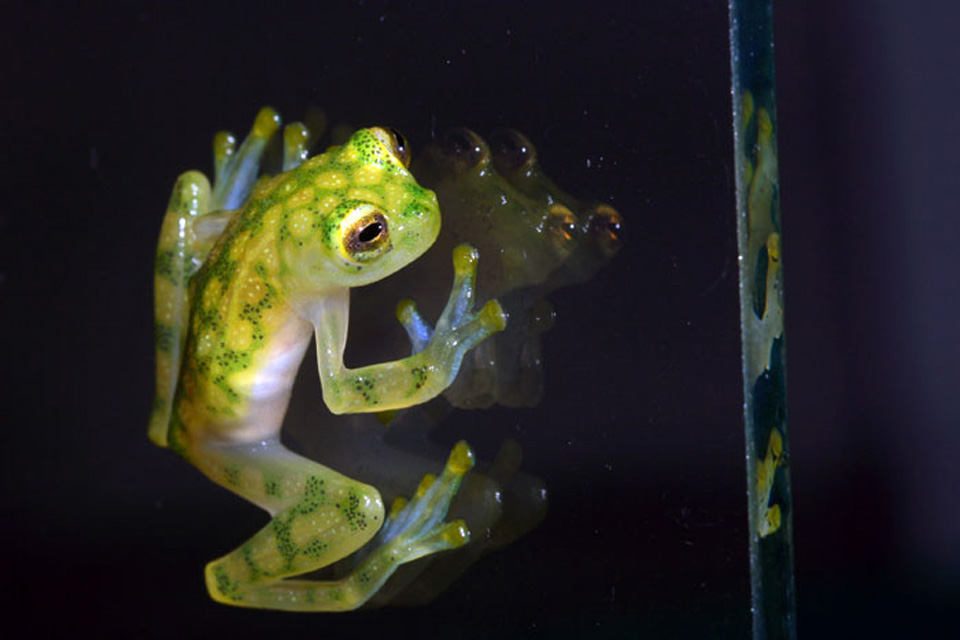 Hyalinobatrachium valereoi
Valereoi is abundant throughout the reserve and widespread throughout Costa Rica. This specimen is F1, captive bred at the CRARC. 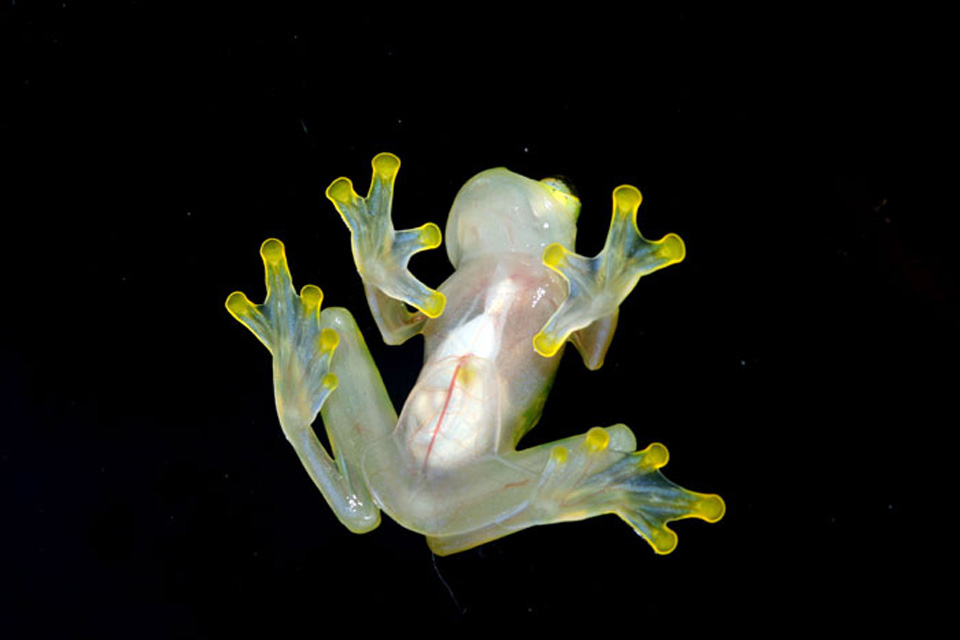 Brian Kubicki has been a bastion of amphibian conservation and research in Costa Rica. Since arriving in the country in 1998 he has become the authority on Central American glass frogs, working tirelessly in the field in attempt to further clarify their natural history, distributions, and taxonomy. His ground breaking investigations with not only glass frogs but Costa Rican amphibians in general have resulted in the publication of two books, several papers (including coauthoring two new species descriptions), and even the rediscovery of four lost species of glass frogs in Costa Rica.

In 2002, Brian established the Costa Rican Amphibian Research Center, which is located in the Caribbean foothills of Costa Rica, near the small town of Guayacan. The CRARC, the first of its kind in Costa Rica, has become in many respects the epicenter of amphibian research and conservation efforts in the country. On his 49 hectare private reserve the CRARC has hosted countless film crews, students and eco-tourists, allowing them the access to a remarkable array of amphibians, including many endangered and rarely encountered species. The importance of CRARC cannot be understated, as Guayacan is to tree frogs, what the Huallaga Canyon is to poison frogs, an inexplicable congregation of amphibian diversity and abundance, rarely seen even in the neo-tropics.

The CRARC has a Costa Rican government approved and registered “Zoocriadero”, which allows for the commercial export of limited numbers of animals produced in captivity in the CRARC lab. The CRARC has exported limited numbers of captive produced animals exclusively to Understory to be used as breeding founders in our facility. These captive propagated animals represent a source of sustainability, by helping by reducing the demand for illegally extracted, and possibly disease spreading animals from the wild.

To help Brian with his research efforts in Costa Rica, and in situ conservation projects within the CRARC private reserve, Understory is returning to the CRARC a 50% donation from the sale of all captive produced animals sold by Understory which originated from the CRARC lab. This program has been designed to ensure some financial liquidity for Brian to allow his research and conservation work to continue, while allowing hobbyists access to new and exciting species from a legal origin. What this means is that half of the gross revenue of all the frogs which are bred at Understory, and that have originated from the CRARC will be channeled directly back to the CRARC. Even if the animal is F9, CRARC will receive its due revenue. All expenses in maintenance, care and marketing as well as logistics will be assumed by Understory. In this way we can use our resources available in Canada to produce animals to help satiate global demand for Costa Rican species, while allowing Brian the time to continue important research and conservation efforts in the field, thus freeing him from some of the many hours involved in raising dozens of often delicate amphibians.

2009 marked the first import of captive bred founders to Understory from the CRARC lab. We look forward to what we hope to be many years working in co-operation with the CRARC, and hopefully together we can provide hobbyists and institutions with legal, healthy captive bred Costa Rican amphibians with the knowledge that the sale of these animals will be helping amphibians where they need it most, in the wild, and preserving and managing vital amphibian habitat.

Please consider directly supporting Brian’s work via his website. Any support would be graciously accepted, appreciated, and put towards research and conservation projects. For more information about the efforts of Brian and the CRARC, please check out www.cramphibian.com