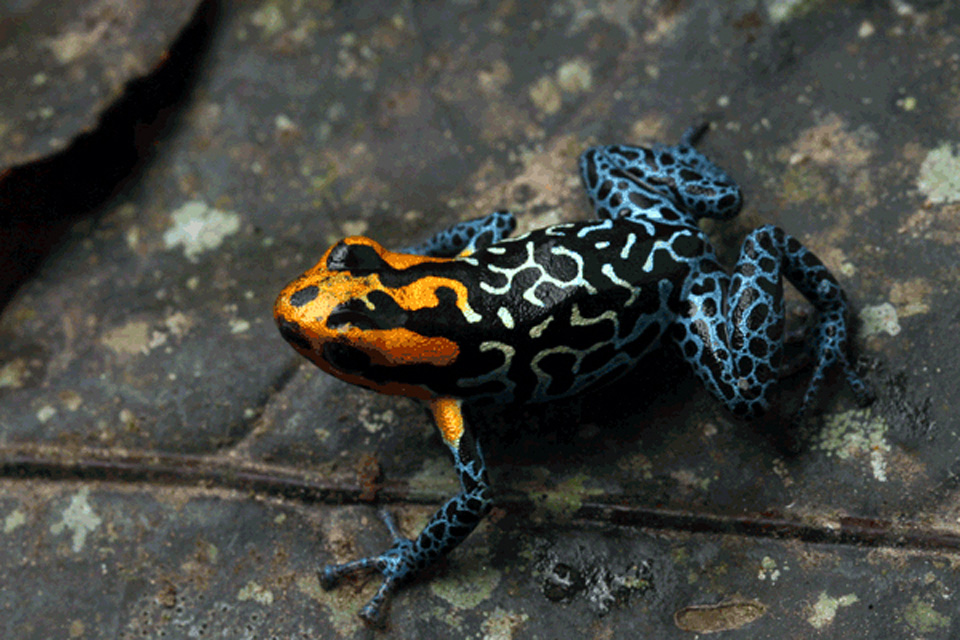 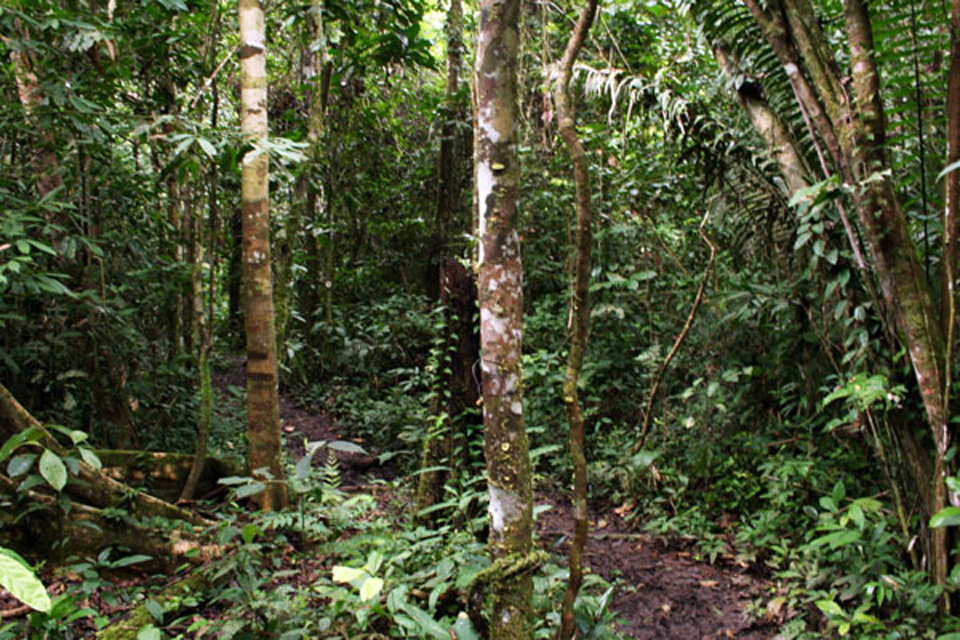 Ranitomeya fantastica habitat
There is much variation represented in these frogs, the orange crown, and the blue/white dorsal reticulum all vary from frog to frog. This individual is a truly spectacular one, photographed in the biotope.
PLEASE CONTACT US FOR PRICES 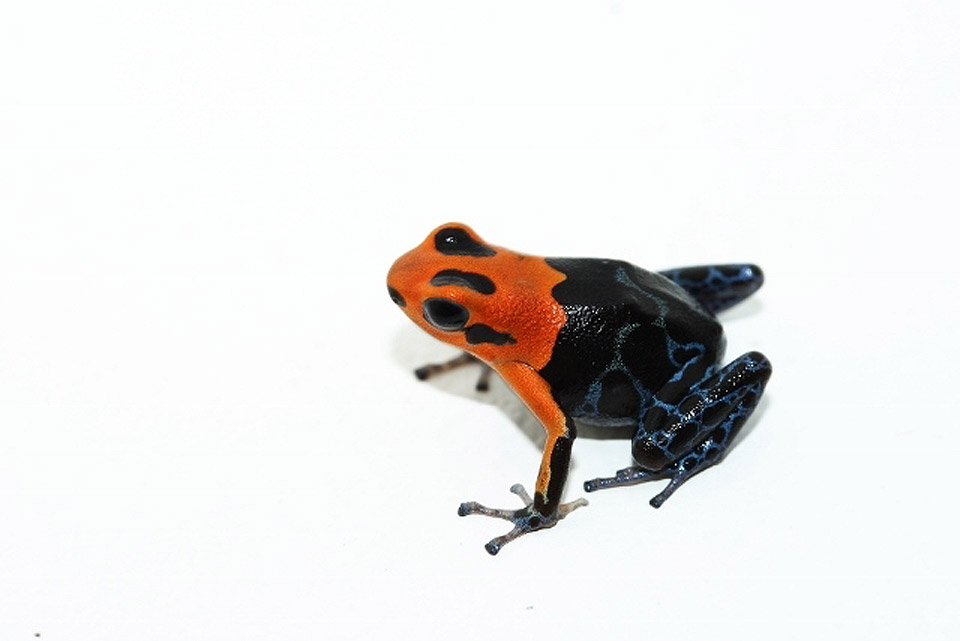 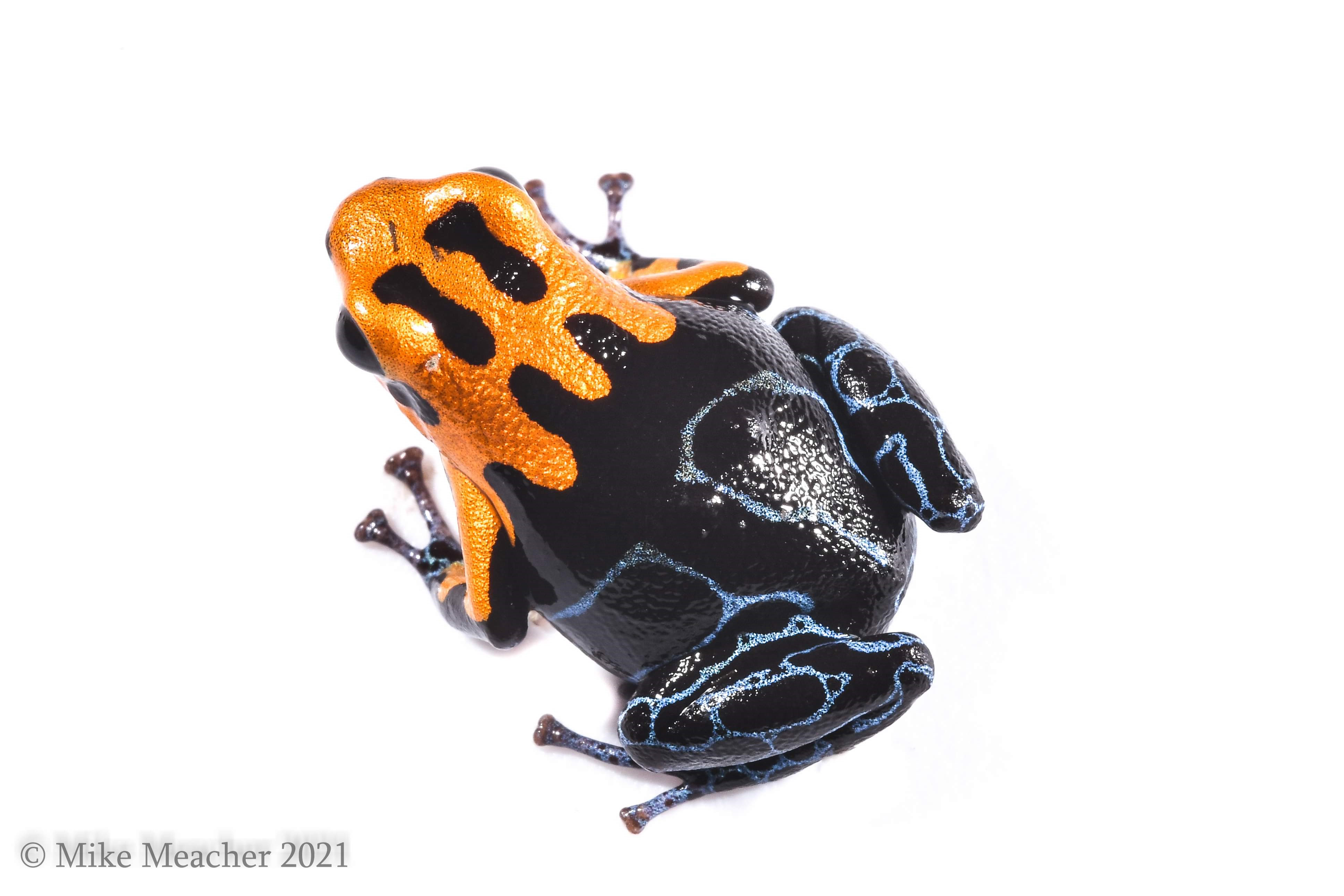 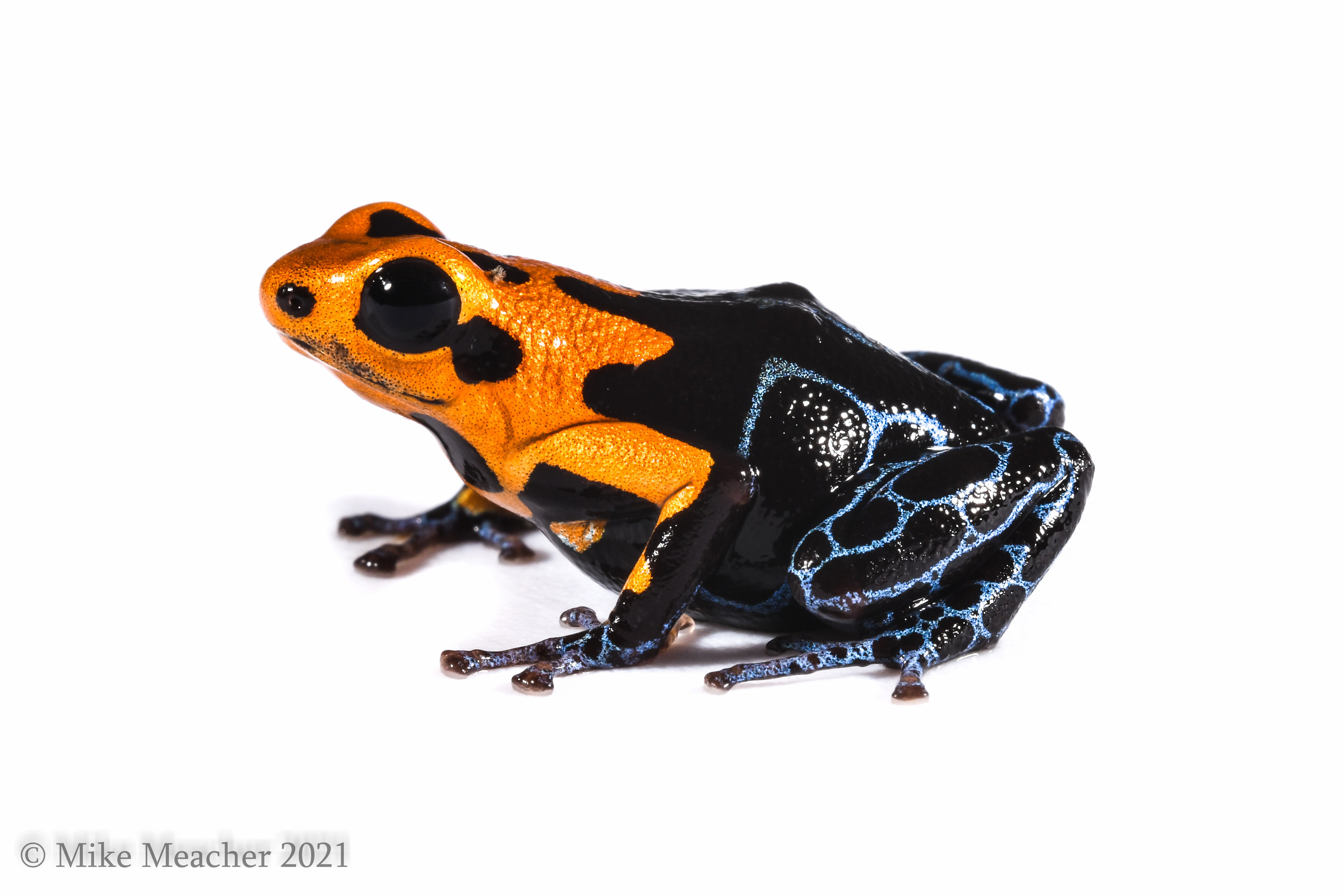 Described by Boulenger 1883 from specimens colleced near Yurimaguas. Extensive searching by ourselves and other interested colleagues has until recently failed to find a fantastica with the solid coloured head as depicted in its description near the vicinity of Yurimaguas. However, Evan Twomey , in July 2011 found several specimens within a few kilometers of Yurimaguas, which appear to be a perfect match of the long lost holotypic form of fantastica. The gently undulating terrain in the vicinity of Yurimaguas has been heavily deforested in recent generations as is the case near any major city in Peru, and this has led to a severely diminished range for this morph.

Fantastica is another Peruvian endemic. The relatively small known range of fantastica spans only north eastern San Martin and neighboring regions of extreme western Loreto. Predominantly a lowland species inhabiting forested regions northeast of the Cordillera Escalera towards Yurimaguas and along the Rio Paranapura. Its distribution eastward further into Loreto is likely hindered by the vast expanses of flooded forest that dominate the area and comprise much of what is Pacaya Samira. It is found throughout much of the rugged Cordillera Escallera where its distribution reaches elevations approaching 1000 m. It does not traverse the dry Tarapoto valley to the west, nor has it been found to the south of Huallaga River.

In the forest fantastica are often extremely difficult to detect. Alert frogs, fantastica are unhesitant flee into the leaf litter of the forest floor upon or even prior to detection. When they are encountered it is most often in open areas around tree falls, amidst the tangle of branches and natural debris, or in other open areas within primary forest. In our experience they are most easily encountered after brief rains, especially during drier months. Presumably the lower strata of the forest, which is typically more humid and supportive of a greater invertebrate and microfaunal abundance upon which they feed entices them to remain concentrated within in the understory, and thus the chance for encounters with them more probable.

Breeding occurs either terrestrially amidst the humid seclusion of leaflitter on the forest floor, or in the protective curls of bromeliad leaves or other sheltered areas provided by vegetation which result in the creation a humid cavity. In captivity film canisters, small pill jars are frequently employed deposition sites. Tadpoles are deposited in phytotelm provided bromeliads, xanthasoma and also in water filled tree holes when available. Clutch size is typically 4-6 eggs.

While we consider this species scansorial to arboreal, the “white banded” population found in the drier forests along the extreme western versant of the Cordillera Escallera near Tarapoto are much more terrestrial.

A fairly small range coupled with deforestation throughout raises concerns for this species in the wild. Heavy collection of specimens from the famous sites in and near the Alto Caynarachi Valley has persisted for at least two decades, and more recently collection pressure has been placed by smugglers upon the recently documented Paranapura populations, with specimens from the latter first showing up showing up in the European hobbyist community around 2006. While some of its range is afforded some protection by the Reserva Communal Cordillera Escallera the greater part of its range remains unprotected and increasingly deforested, and large thanks due to the cancerous spread of oil palm plantation in the lowlands beyond Pongo de Caynarachi. Where suitable habitat does persist populations still thrive.

This species represents a remarkable degree of both inter and intrapopulational variation. In general, they posses a golden to red/orange crown which terminates generally just behind the head/shoulders. The body is in all cases black, usually with some degree of white to light blue reticulum across the dorsal, ventral surfaces and the limbs.

True Nominal: Most specimens posess the solid orange head with a bold white belt which separate the orange crown from the black for the dorsum. Limb and dorsum only very faintly reticulated. The gently undulating terrain in the vicinity of Yurimaguas has been heavily deforested in recent generations, as is the case near any major city in Peru. We only know this frog from one remnant patch of forest (approx.. 40 ha.) which is surrounded by cattle pasture. Further exploration of remant forest near yurimaguas is warranted. We believe this morph to be extremely endangered, and may well be lost in the very near future to the expansion of plantations, oil palm or otherwise.

Reticulated: Our encounters with this morph have been few despite days and days of searching thus we hesitate to draw many conclusions other than it is a strikingly beautiful morph, that is incredibly elusive. It is slightly smaller than the previously mentioned morphs.

Lowland: From the hot lowland forests near Pong de Caynarachi hails this incredibly variable morph. We have found this frog in only a few small remnant patches of forest. These populations are highly variable, some possessing a high degree of chaotic reticulations on the dorsum, while others have a very moderate amount, often appearing striped, and superficially similar in appearance to the sympatric populations of R. variabilis. This incredibly beautiful morph, is highly endangered.